If you had to name your top three favourite cars, what would they be?

That’s one of the hardest questions you can ask a man, especially one with such a vast fleet of cars and such a passion for them all. For all round comfort I would select the Bentley GTC, for a car I can use every day and still have fun with I would choose the brand new Range Rover, in particular the 5L Autobiography, which we’ve just taken delivery of and it’s absolutely awesome. And for my third car, I guess I’d have to go for a sporty number, and looking out over the cars we have, the Lamborghini Aventador is definitely saying ‘drive me’.

Did any of the cars exceed the expectations you had before you saw them for the first time?

The Lamborghini Aventador was without a doubt the one that blew me away the most, I think Lamborghini have come such a long way in terms of their technology, they’re so ahead of themselves it’s almost futuristic. I mean that car is pretty much what I’d  consider to be a cockpit of a fighter jet aeroplane, that’s exactly what it reminds me of in terms of  selecting starting and stopping and everything else that goes on with the car, it’s absolutely amazing. Such a James Bond car! 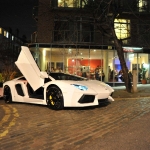 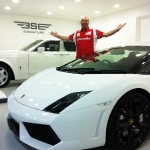 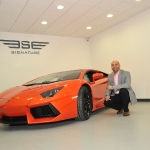 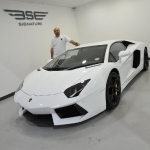 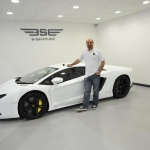 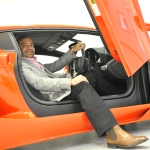 Additionally, the all new Range Rover has been completely revolutionised from its predecessors, it’s a completely new beast altogether, absolutely phenomenal. It’s a real favourite of mine for everyday use and it really does tick all the boxes.

How has your driving experience changed in the new Range Rover compared to previous models?

I would say better comfort, better sound. Previous Range Rovers typically didn’t have very good reliability, but this has changed completely with all its gadgets, and even though it always had one of the best sat navs that too has completely changed. It’s an indicator of how much everything has improved; including the size of the vehicle, its all-round ability, vision, things like that. It really has come a long way; all round it’s hugely different to its predecessors.

If you could take a car anywhere for the weekend, where would you go? Would you drive or be chauffeured?

I’ve got to say, if you went back ten years to the early part of when we started Signature, there’s nothing more that I’d want to do than take a trip through Europe in a Lamborghini. You obviously couldn’t do it all in one weekend, but I’d go as far as I possibly could.

You’re obviously very particular about your cars, what criteria do you use when selecting cars for Signature?

I look for what’s hot, what people are talking about, who’s made the most ground-breaking changes. Sometimes face-lifts aren’t very exciting because there are very few changes underneath, but when a car goes through revolutionary a change that’s when I look at upgrading and stocking new cars. I’ve already said that 2014 is an extremely exciting year for new cars, especially for us the new S Class, the new Range Rovers, the new Bentley Flying Spur, the new Porsche 911 Turbo, I could go on and on. You’ll see a lot of changes for us this year.

You take delivery of new cars on a regular basis – is there anything that still gives you that wow factor?

Any delivery of any new car is extremely exciting, although now it’s less about needing to drive the car than actually appreciating it for what it is. I’ll look at the car, sit in it, get to grips with the features and then of course take it for a drive, but it’s not like before when I’d just jump in because it was all about power. It means much more now to have the complete package, and I think people are becoming more discerning about what they want in a sports car; in the old days you’d take any old Ferrari, because it was just about its engine and power. Now it’s about having sat navs, good quality seats, heated seats, air conditioning, et cetera: there’s been a huge revolution in that market.

What about your favourite marque for comfort?

For drivability, for comfort every day, I’d say Mercedes AMG make a fantastic car – you can have a car like an S Class that has a beautiful engine and still gives you a smooth ride.

What about for thrills?

Ferrari or Lamborghini without a doubt. Having said that, we’ve got some very enthusiastic Porsche drivers and everyone who’s driven the new Turbo S has been amazed by it. 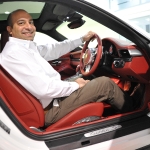 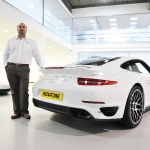 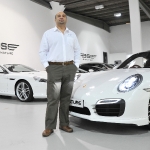 What do you say to people who say hiring a car is expensive?

I’d say they’re mistaken; it’s a myth to think that owning a car works out to be cheaper. Look at cars such as the supercars we have on fleet – people are often very surprised when we tell them how much it costs to maintain them. Simple things like a Lamborghini clutch change, which can happen every 5-10,000 miles, can cost us up to £4-5,000 a time. That’s not to mention the usual wear and tear on tyres, which can easily be around £1,000 a set; I could go on and on!

Depreciation is the other huge factor: manufacturers are bringing out many more new models than they used to, which is encouraging faster depreciation, something to watch out for!

I also think that the availability of driving a huge garage of cars is an unbeatable advantage that you can only get from hire.

How can companies benefit by using Signature for their executive transportation?

Two things, our bespoke chauffeuring team will look after you, whether that’s a simple airport transfer or having the car and driver for the whole day to take you to all your meetings, look after you and take you door to door on schedule.

Corporates can also benefit from what we do in self-drive hire. We offer special rates to those looking to offer incentive schemes to their staff, it’s an area that we’ve seen growing, that we’re really enjoying working on and that we’re looking to expand even more in 2014.

What’s at the heart of Signature?

Uniqueness in understanding our customers; and hopefully, delivering absolute satisfaction to them in every aspect, from when they first call or email the office to when we’ve delivered and then picked up the car. I consider it to be an experience, and that’s something I hope all my staff aspire to deliver.

What could you not live without?

Signature has grown to be what it is because if the satisfaction of our clients and their great feedback is something I couldn’t live without.