Last month we shared how Signatures fleet of supercars can be used to help motivate staff with a supercar incentive!

This is exactly what owner of Foreign Currency Direct Peter Ellis did to get his staff motivated. Members of his staff were given the chance to win one of our supercars for a weekend hire which motivated them all to push their abilities and efforts at work to be in with a chance of being the lucky winner of this spectacular incentive.

Lucky winner Tom, pictured here when the car arrived, said “ I had a fantastic weekend with the Lamborghini Gallardo Spyder.” Tom took his wife away for couple of days and said he was really glad that he had worked so hard and been rewarded with the rental of this car. In fact, he has such a good time he is now planning on hiring a car from Signature himself in the future as the vehicle and service impressed him so much.

We are delighted that both Tom and his wife enjoyed the car and that Peter Ellis was so impressed with the whole incentive. 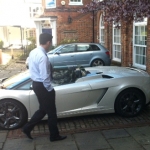 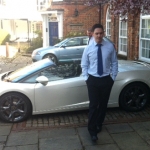 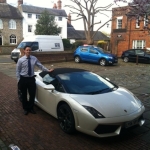