The Aventador was intended to be a quantum leap forward in design, distinct from previous models yet respectful of what previous designers had achieved. Given the gorgeous and iconic styling of cars such as the Gallardo and Murcielago, those at Centro Stile Lamborghini in Sant’Agata Bolognese certainly faced a challenge. Look at any one of our three Aventador hire cars, in addition to the new Aventador Roadster hire car which is coming soon to Signature and you will see why they exceeded all expectations.

One of the engineers’ key tasks was to optimise the aerodynamics of the car, and this shines through in the sleek, clean lines of the Aventador, particularly the ‘Tornado Line’, which connects the front of the car to the rear spoiler. This is an essential part of the car’s side profile, which, as director of Centro Stile Lamborghini Filippo Perini has explained, is what defines the car’s character. Lamborghini is the only marque in the world that builds cars with a single top line, and this is easily observable in the way that the Aventador seems diamond-cut, both when stationery and in motion.

They achieve this by stashing all the mechanics in the car’s wheelbase, allowing for fluid connecting lines over the car which give it tension, precision and sensuality. Even with the top down on the Aventador Roadster, the viewer is still keenly aware of the poetry of these connecting lines.

When describing the Aventador’s appearance, almost everyone has used the same word: ‘futuristic‘. This is for two main reasons. First, the engine is positioned towards the back of the car in its centre of gravity, known as the ‘rear longitudinal’ position. This dramatically improves the car’s performance, and allows for the exceptionally low nose and characteristic ‘V’ shape – something which is enhanced by those fierce winged headlights. Second, the inspiration for the car’s design has been taken from the aeronautical world, and if you look at the razor-sharp contours of hi-tech stealth planes the likeness is unmistakable.

One of the most recognisable features on the Aventador is the double air openings on its side panels, which not only create a sculptured feel to the sides of the car but also do the important work of cooling the car’s brakes and radiators. The entire car, in fact, displays harmony between aesthetic and function: the hidden spoiler, which only extends when needed at mid-high speeds, is just another example of this.

What is also immediately obvious about this stunning car is its symmetry, and there’s denying that it looks almost mathematical in its precision. Its sharp yet harmonious contours are even more prominent in the Aventador Roadster, on which the geometrical shapes of its cut-out windows, the sharply pointed edges of its fold-down roof, the vertical-opening doors and those trademark hexagonal slots on top all exaggerate the overall effect.

If you’d like to hire a Signature Lamborghini or Signature Aventador Roadster rental car, contact Signature Car Hire on 0845 370 2222 today and be the first in the UK to rent this fantastic car on self-drive hire basis. 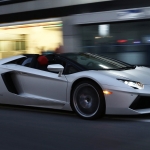 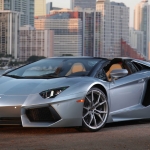 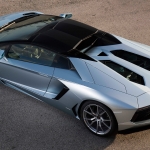