It’s a good year for Mini enthusiasts, as the new Cooper, Cooper D, and Cooper S models are being released in March 2014, followed by the MINI One and MINI Cooper S JCW later on in the year. There may even be a five door version towards Christmas – watch this space!

Despite the name, this is the biggest MINI yet – 4.5 inches longer, 1.7 inches broader and 0.3 inches taller, to be precise. This is an advantage for anyone who’s previously felt confined by the MINI’s interior: this new version has over 50 litres more boot space as well as expanded legroom. While it retains the classic MINI look, an arch of LED running lamps, a larger grille, larger taillights and elongated handles are just a few of the tweaks for 2014.

Even the engines are bigger: now producing 134bhp and 114 bhp in the Cooper and Cooper D respectively, meaning that their 0-60 speed has noticeably decreased. The cars also feature new a front-wheel-drive structure from BMW, which is set to be a huge feature of both marques from now on.

The most noticeable changes are on the inside, including dramatic changes to the centre console and that famous giant speedometer. Stay tuned for further updates on all the MINI models. 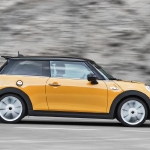 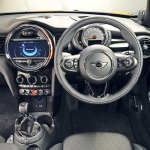 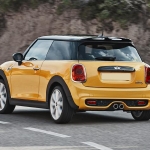 If you can’t wait, however, why not contact the Signature Experience Centre in London and put your name down to have first hire a Mini when they arrive at our HQ in the next few months? Call one of our personal account managers and find out how easy it is to reserve one of these Mini but mighty cars to drive away in next month.