Porsche have designed the Macan to be their first foray into the lucrative micro SUV market, which is currently dominated by cars such as the Range Rover Evoque and the Audi Q5. The design of the Macan logically follows that of its bigger brother, the Porsche Cayenne, and in fact was even destined to be called the CaJun (Cayenne Junior) before Porsche decided that ‘Macan’, which means ‘tiger’ in Indonesian, was more appropriate for this feisty little vehicle.

Yes, it’s undoubtedly a capable 4×4, that will easily dominate the ex-military off-road track at Porsche’s base in Leipzig, yet those who worry that Porsche is losing track of its sporting heritage will instantly have their fears allayed when they take the Macan for a spin. In the Turbo, its fastest model, the turbo-charged V6 engine will take the Macan from 0-60 in just under 5 seconds, despite the vehicle weighing in at over 1800kg.

The Macan is designed to be an ‘Urban Lifestyle SUV’, meaning that as well as sharing about a third of its parts with the Audi Q5 and having more than enough power to handle any terrain, it has a certain sportscar chic. With a sloped roof, long, low nose, attractive side vents and more than a hint of 911 about it, this car is going to impress wherever you take it. 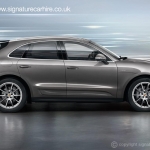 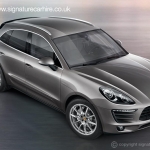 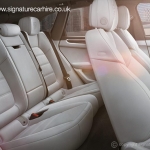 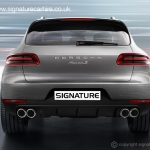 If you’d like to learn more about this surprising micro SUV that has been wowing the critics, then contact the Signature Experience Centre to found out all about our Porsche Macan Turbo car hire.