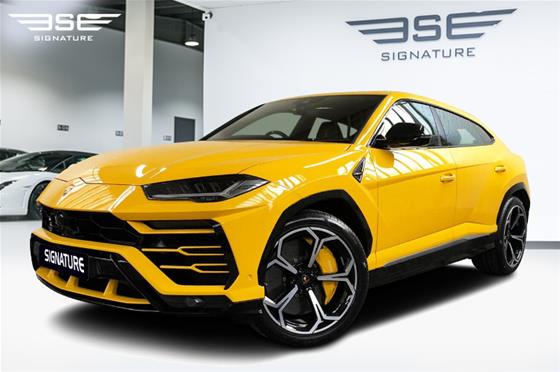 Signature’s fleet of Lamborghini self-drive vehicles are quite simply breath-taking. Edgy, futuristic and sleek in design from the nose to tail, these cars delivers on every level.

Technologically driven and inspiring these performance supercars are glossy sleek and pack a punch on the road. If you are looking for a thrilling car hire experience then any one of our Lamborghini rental cars will get your heart pumping with pure driving exhilaration.

All our Lamborghinis are built to the highest specifications and include the latest technology to ensure your driving experience is a thrill seekers dream drive. Fast and furious, performance driven and exceptionally exciting, these supercars are packed full of gadgets, gismos galore.

To see which Lamborghini suits your car hire needs, simply click on the model above for prices and further information. Alternatively call one of our experienced customer care advisors on 0207 118 2244 who can talk you through all the benefits of each model we have on fleet in our London showroom.

Automobili Lamborghini S.p.A., commonly referred to as Lamborghini is an Italian automaker based in the small township of Sant’Agata Bolognese. The company was founded in 1963 by manufacturing magnate Ferruccio Lamborghini. It has changed ownership numerous times since, most recently becoming a subsidiary of German car manufacturer AUDI AG.

Lamborghini has achieved widespread recognition for its sleek, exotic designs, and its cars have become symbols of performance and wealth.

Assembly of Lamborghini cars continues to take place at the automaker’s ancestral home in Sant’Agata Bolognese, where engine and automobile production lines run side-by-side at the company’s single factory. Each year, the facility produces less than 3,000 examples of the four models offered for sale

The range is occasionally complemented by limited-edition variants of the four main models, such as the Reventón and a number of Superleggera trim packages.

Hire a Lamborghini Aventador from Signature Car Hire if you want to get a taste of what our exciting Aventador is all about. This car has won rave reviews from fierce car critics to admiration for car paparazzi on YouTube. The Aventador can go from 0 – 60 mph in 2.9 seconds; it is figures like these that make this bullet of a car a must have when you hire a Lamborghini for the day. The technological touches of Lamborghini are evident in the Aventador thanks to the automatic transmission which is powered by the independent shifting rods system. The allure of the Aventador and the thrill of the Gallardo make a Lamborghini a popular option for super car drivers who know their top speeds off by heart and want to test their driving skills.

Whether you want a British Luxury car or a sleek Italian supercar, a car like a Lamborghini is the perfect car to drive if you are passionate about sports cars during Lamborghini Rental. Lamborghini suits drivers who have flamboyant and stylish inclinations towards driving. Try Lamborghini Rental to get a flavour for Ferrucio Lamborghini’s marque that is quickly becoming one of the most popular marques in the world from China to Lamborghini Rental London. We provide a nationwide Lamborghini car rental service covering all major UK locations including London and the surrounding Home Counties.

Automobili Lamborghini was founded by Ferruccio Lamborghini, the child of viticulturists from the comune of Renazzo di Cento, Province of Ferrara, in the Emilia-Romagna region of Northern Italy. After serving as a mechanic in the Regia Aeronautica, during World War II, Lamborghini went into business building tractors out of leftover military hardware from the war effort. By the mid-1950s, Lamborghini's tractor company, Lamborghini Trattori S.p.A., had become one of the largest agricultural equipment manufacturers in the country.

Lamborghini's wealth allowed him to cultivate a childhood interest in cars, owning a number of luxury automobiles including Alfa Romeos, Lancias, Maseratis, and a Mercedes Benz. He purchased his first Ferrari, a 250GT, in 1958, and went on to own several more. Lamborghini was fond of the Ferraris, but considered them too noisy and rough to be proper road cars, likening them to repurposed track cars. Lamborghini gradually gained the impetus to create cars as he envisioned them, and decided to pursue an automobile manufacturing venture of his own.

Lamborghini met with success in 1966 with the release of the mid-engined Miura sports coupé, and in 1968 with the Espada GT, the latter of which sold over 1,200 units during ten years of production. After almost a decade of rapid growth, and the release of classic models like the Countach in 1974, hard times befell the company in the late 1970s, as sales plunged in the wake of the 1973 oil crisis. Bankruptcy crippled the automaker, and after passing through the hands of a number of Swiss entrepreneurs, Lamborghini came under the corporate umbrella of industry giant Chrysler. The American company failed to make the Italian manufacturer profitable, and in 1994, the company was sold to Indonesian interests.

Lamborghini would remain on life support throughout the rest of the 1990s, continuously updating the Diablo of 1990 in lieu of a planned expanded range of offerings, including a smaller car that would appeal to American enthusiasts. Reeling from the Asian financial crisis of the previous year, in 1998 Lamborghini's owners sold the troubled automaker to AUDI AG, the luxury car subsidiary of German automotive concern Volkswagen Group. German ownership marked the beginning of a period of stability and increased productivity for Lamborghini, with sales increasing nearly tenfold over the course of the next decade.

The world of bullfighting is a key part of Lamborghini's identity. In 1962, Ferruccio Lamborghini visited the Seville ranch of Don Eduardo Miura, a renowned breeder of Spanish fighting bulls. Lamborghini, a Taurus himself, was so impressed by the majestic Miura animals that he decided to adopt a raging bull as the emblem for the automaker he would open shortly. Most of the company's cars have been named after famous fighting bulls, although oddly most have been Spanish bulls not Italian.

Interestingly it is said that the choice of an animal and the colours used on the logo, gold on a black background, and a charging bull, are suspiciously similar to the Ferrari logo, a black horse on a yellow background. It is believed that this was no accident on the part of Lamborghini, who had a long standing and not always friendly rivalry with Ferrari.