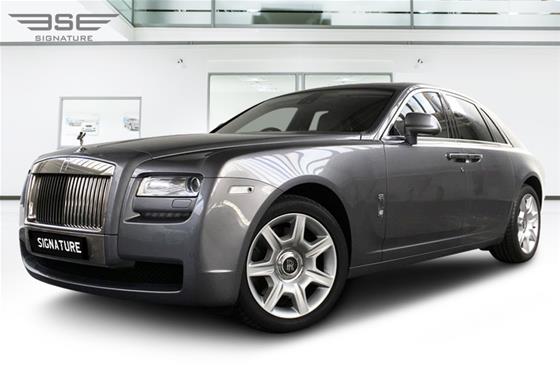 Signature's luxury fleet of exquisite Rolls Royce vehicles are simply sublime. Effortlessly elegant, exceptional designed and finishing with sumptuous interiors each Rolls Royce on the Signature prestige fleet will impress. Available for hire with our highly trained executive chauffeurs our Rolls Royce cars are built to the highest standards and ideal for the most memorable occasions in life.

These beautiful luxury vehicles combine the best in British design and craftsmanship to produce a vehicle which is ornate and beautiful to produce the pinnacle of driving luxury on the road. Their exceptional design and finishing is matched by the advanced technology and entertainment systems on board ensuing every passenger feels like Royalty.

To see which Rolls Royce suits your car hire needs, simply click on the model above for prices and further information. Alternatively call one of our experienced customer care advisors on 0207 118 2244 who can talk you through all the benefits of each model we have on fleet in our London showroom.

Since 1904 Rolls-Royce has created instantly recognisable motor cars that have made the marque an enduring icon all over the world. Inspired by some of the most evocative cars ever built, Roll-Royce produce exquisite cars for the luxury car market.

Phantom redefined the marque for the 21st Century - a fitting celebration of the principles of Sir Henry Royce. This continuing pursuit of innovation has created new benchmarks for the industry. The launch of the Ghost marks the next stage in the evolution of the marque. To develop and build the most technologically advanced car of its kind Rolls-Royce have invested heavily in their staff and facilities at Goodwood. This investment will help Rolls Royce develop new models that will continue to grow the company's reputation.

One of the most famous cars from the brand is the Phantom. With a hauntingly beautiful name like this, the car lives up to its incandescent beauty that has made it famous from its exterior to its interior. A Rolls Royce Phantom hire makes it possible for you to experience the luxury of this car, finer details including the soft Cornsilk hide is of the interior, beautiful detailing and exquisite design.

When you opt for our Rolls Royce for hire, you ultimately want to evoke a feeling or an emotion because of what the brand means. The Ghost is another model from the marque that was released to rave reviews. Coming in a mix of colours such as Silver to Black, the Ghost can go from 0 - 60 mph in just 4.7 seconds. Rolls Royce rental is your opportunity to get behind the steering wheel of a Rolls Royce which has speed and refinement in the same breath. From vintage Rolls Royce to classic Rolls Royce, the spirit of luxurious driving is thriving with the popularity of the Phantom, Ghost and Drophead Phantom. Experience Signature's Rolls Royce car hire service by visiting

Rolls-Royce Limited was created over a famous lunch brokered by Henry Edmunds at the Midland Hotel in Manchester on 4th May 1904. Edmunds brought together Henry Royce, a successful engineer and Charles Rolls, the owner of one of the first car dealerships. The rest is history.

Charles Rolls trained as a mechanical engineer at Cambridge. The first undergraduate to own a car, he soon began racing and to fund his passion set up a car dealership, selling mostly foreign cars.

By 1903 he was looking for a supplier of reliable English cars which led to his introduction to Henry Royce. Rolls was also an accomplished pilot, he was the first aviator to complete a double crossing of the English Channel.

Tragically, he was killed when his aircraft crashed at an air show in July 1910.

Henry Royce had a passion for engineering and set up his first business at the age of 21. Known for his attention to detail and pursuit of perfection, he registered his first patent (the bayonet lamp socket) in 1887 and went on to produce dynamos, electrical motors and world-renowned cranes.

Dissatisfied with his first car in 1902 - a Decauville - Royce characteristically decided he could improve on it and turned his attention to build the best motor cars in the world.

By the end of 1903 Royce had designed and built his first engine and the first of three prototypes took to the road in 1904. First introduced in 1907, the 40/50 HP, later to become known as the Silver Ghost, remained in production until 1925. It was powered by a six-cylinder engine in two blocks of three and originally displaced 7,036cc but in 1909 this was increased to 7,428cc. Best-known body styles included the Barker Tourer, Hooper Landaulet, the London-Edinburgh type and Barker enclosed cabriolet.

The first cars were built in Royce's Cooke Street factory in Manchester but following the success of the Silver Ghost, the company moved to a custom-built factory, designed by Royce, in Nightingale Road, Derby.

Rolls Royce has a proud heritage of craftsmanship using traditional techniques with the latest technology to produce the words most luxurious cars. Discover Rolls Royces unique combination to create this iconic car. 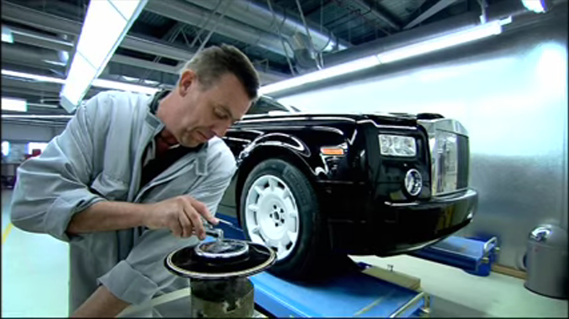 Recognised the world over, the Spirit of Ecstasy was originally commissioned in 1911. It was created by sculptor Charles Sykes and modeled on Lord Montagu's private secretary Eleanor Valesco Thornton. Each Spirit of Ecstasy is created individually using centuries-old 'lost wax' casting techniques, originally perfected in ancient Egypt and China. It's a time-consuming process that rewards with the finest details, seen in the life-like features of the face, hair, hands and feet of the finished statue. Normally cast in stainless steel, the Spirit of Ecstasy is also available in solid hallmarked silver or gold through the Bespoke programme.