Although only announced at the 2009 Shanghai Show, the modern Ghost series is actually named in honour of the Rolls Royce Silver Ghost, the iconic 1906 model of which over 7000 were sold in the first two decades of its existence. The first modern ghost, which had its debut at the Frankfurt Motor Show in 2009, was designed to be a smaller Rolls Royce that could offer a cheaper alternative to the Phantom and compete with the likes of the Bentley Flying Spur.

The Ghost Series II, destined to hit car dealers’ shelves in 2015, was this time debuted at the 2014 Geneva Motor Show. Changes are subtle, particularly to the exterior design. Larger air intakes, new shape LED headlights, and a re-designed bonnet, which features a tapered wake channel that is supposed to evoke a jet engine’s vapour trail, are the key differences to spot.

Once you’re sat in the Ghost II’s plush interior, you might notice modified front seats, which now offer adjustable thigh supports, or the comfier and more intimate ‘lounge seat’ configuration in the back. The standards of luxury have not slipped, and the Ghost II offers upgraded fabrics and interior design choices, as well as an improved infotainment system which features better connectivity options and can be – to some extent – controlled by touchpad.

Although the luxurious interior and statesman-like appearance might convey images of slow grandeur, the Ghost Series II still harbours a twin-turbo V12 engine that will take the car from 0-60MPH in 4.8 seconds – not bad for something that looks more like a limo than a sports car! The engine in this rear-wheel-drive car is unchanged from the previous model – it creates 565BHP and is linked to an eight-speed automatic gearbox, which uses a GPS to select the appropriate gear for the road ahead. 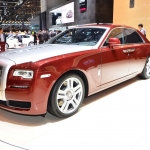 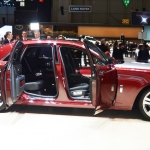 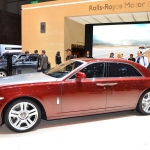 If you’re hoping to be one of the first to hire the Rolls Royce Ghost Series II through Signature Car Hire, watch this space for further updates.