Huracán (according to Lamborghini) was a bull that fought in Alicante in 1879………. A hurricane is defined as a tropical cyclone with sustained winds that have reached speeds of 74 mph or higher……and Huracan is a Mayan god of wind, storm, fire and one of the creator deities who participated in all three attempts at creating humanity.

With its triple meaning of storm, Mayan god, and raging bull, this might be the coolest car name ever, so cool and so popular that early demand for the car for hire from Signature was so big that we had to buy two!

Roaring into the Signature Experience Centre our brand new Lamborghini Huracan took centre stage…. a silence then ensued as staff peered through the glass walls to admire this glistening beauty. With a top speed of 202mph this masterpiece of Italian engineering and design would leave any Hurricane almost quivering in its wake.

It has been over a month since Signature’s first Lamborghini Huracan arrived, released early to VIP Car Club Members for an exclusive period of driving bliss. With demand as hot as it has ever been for any of the performance cars, Signature quickly sourced a brother to this raging beast. With interest now at fever pitch, we are delighted to release the first official pictures of our additional new car.

If you have a passion for supercars and want to be the first behind the wheel of any new release, then apply for an exclusive invitation to join the Signature Car Club. Members have access to rare and limited edition models in addition to new acquisitions for a period of time before they are realised to general release. For more details about how you can be invited, click here. Alternatively, call us on 0845 370 2222 to see how you can step inside and feel the power of the Huracan. 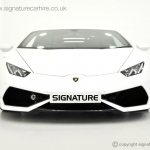 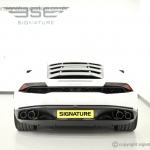 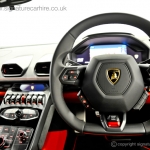