Design
The Continental Flying Spur has been in the Bentley Stable since 1957, when it was a four-door saloon made to order by coachbuilders H.J. Mulliner & Co, the famously sought-after company that merged with Bentley in 1959. This version of the Continental Flying Spur lasted until just 1966, but the name was later revived in 2006 as a four-door alternative to the Bentley GT. These were produced until last year.

Now, however, Bentley has shortened the name to the ‘Flying Spur’, and created a new Continental-style luxury saloon that bears many similarities to its predecessor. Look closer, however, and you’ll discover a host of updated features that ensure this Flying Spur is modern yet classic, powerful yet elegant.

At 5.295metres long, this is a car that certainly stands out, and any Bentley aficionados will soon spot that the marque’s trademark smooth curves are now accompanied by sharp new modern edges. The car’s profile glides elegantly from the smooth front to the car’s more pronounced rear end, and is emphasised by the delicate side feature line that runs from chrome front grille to the rear arch which houses 21 inch painted wheels.

Two of the most obviously updated features are at the rear of the car, namely the wrap-around tail lights and the oval exhaust pipes.

To commemorate the origins of the Flying Spur, Bentley have released a top specification version of this new car: the Flying Spur W12 Mulliner. The extra design details on this version are subtle: for example the Mulliner name features on the chrome wing vent detailing and the treadplates, the car carries specially designed five-spoke two-piece alloy wheels, and inside the car’s sporting heritage is hinted at by drilled alloy sports pedals and a knurled sports gear lever.

To find out more about new Bentley Flying Spur hire from Signature, contact us today. 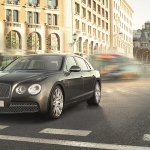 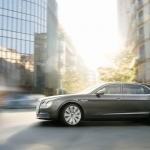 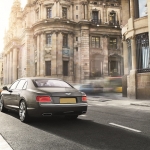