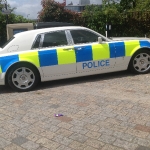 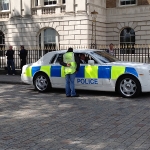 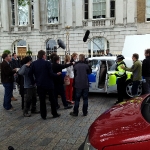 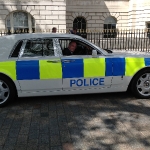 Once again Signature Car hire is used to provide one of its flagship cars for the TV industry.

Our white Rolls Royce Phantom was given a surprising make over for a forthcoming TV comedy programme currently being filmed in London. Our Rolls Royce was wrapped with the famous Police stripes, not what you would expect for such a prestigious car. The new programme; a Touch of Cloth, is due to air in August, so perhaps all will become clear on why this marque and model was selected for such a role.

John Hannah and Suranne Jones star in this special one-off comedy ‘A Touch Of Cloth’, which will spoof the very best and worst of British crime dramas made in the last decade.

A Touch of Cloth is an all-encompassing parody (1 x 120 minutes) of every police procedural ever written based on a story by Boris Starling (Messiah) with the screenplay written by one of Britain’s comedy geniuses Charlie Brooker. Staring John Hannah (The Mummy, Spartacus) as DCI Jack Cloth – a maverick, heavy drinking loner who has thrown himself into his work following the mysterious death of his wife and Suranne Jones (Coronation Street, Unforgiven) who plays the plucky no-nonsense sidekick DC Anne Oldman.

Together the pair investigates a series of increasingly grisly murders and find themselves on the trail of a devious killer. Lucy Lumsden, Head of Comedy, Sky Entertainment, commented: “Witty, naughty and unashamedly silly – Charlie Brooker gives the British TV Detective genre a right good comedy kicking with this one-off special for Sky 1 HD.”

Filming took place at Tower Hill at Trinity House and will air on Sky1 later this year. Keep a close look out for a scene where the police commissioner jumps into our specially wrapped Rolls Royce Ghost.

One of our most experienced chauffeurs was on set to ensure our car was well looked after, and not involved in any police car chases! These pictures have already created quite a buzz on Facebook and Twitter, and we were certainly proud to be on set and able to provide the TV Company with the exact make and model required for their shoot.

Signature is certainly well equipped to deal with such bespoke requests, and we often rent our cars for TV and film. In fact our cars are also used for commercials and photo shoots, and only recently opened up our Experience Centre for a photo shoot for our Range Rover Evoque over a span of 3 days. Our fleet of cars and Experience Centre are available for any commercial interest and we welcome enquiries from companies and professional individuals looking for superb cars and a great location.