“On Thursday it was my birthday, and I fulfilled a promise I made to myself many years ago. I’ve always been a car nut, and when I was about 6 years old and had posters of Lamborghinis on my bedroom walls I promised myself that by the time I reached 35 I would have one. That would be long enough in the future that it might happen, but I’d still be young enough to still be able to appreciate it. Well, as it got to the beginning of this year I realised I was running out of time and my bank balance didn’t quite look large enough to buy a Lamborghini. So, I cheated a little and I hired one for the day on Thursday.. 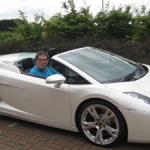 I had one car booked a few weeks ago, but unfortunately the company involved had to let me down as the car developed problems a couple of days before I was due to have it and needed to go away for repairs. I’m not going to complain too much about them, as it wasn’t their fault and they did their level best to make things right: offering a different car, a refund or a later replacement hire. But dammit! I wanted the Lamborghini and I wanted it on my birthday! I quickly rang around on Wednesday to find somebody else, and thankfully the folks at Signature Car Hire were very helpful, sorting out a car with just a few hours’ notice. Yay!

When they guys turned up on Thursday morning to deliver the car to my office, I couldn’t stop myself grinning like the 6-year old boy whose promise I was keeping. Here was a gorgeous car, and it was mine for the day!!! I planned a route for the day to take in some nice driving roads and, importantly, some tunnels. I’ve watched Top Gear on the TV and I read Autocar every week, and they had both said that taking a fast sports car through a tunnel with the roof down was a good thing to do. I now know that’s an understatement!

As a whole, the car was awesome: the acceleration, the handling, the brakes were all wonderful. But, as I found out on that day, the noise from the engine was just astonishing. I went through several tunnels that day, heading down past Baldock to Hatfield and back, and at full throttle I could not help but laugh out loud at the music coming from the 5–litre V10 orchestra just inches behind me. It’s an experience I’m never going to forget. grin.

I also gave short rides to quite a few of the people at work; oddly I had lots of friends that day… :-). ” Steve McIntyre.